Joanne Mungovin, our Heritage Practitioner for the St. Matthew’s group, recently took a group of students from Moat College for a walk around Leicester to discover the city’s Victorian history. Here, Joanne writes about what they found along the way.

Leicester is an extremely ancient City, probably one of the oldest in the country. But to see all that you must look beyond the new shopping centres, fancy condos and the exquisite unique shops. Get into the back streets and look around you. This is what I did with the students from Moat College. We are doing a project on Joseph Merrick – aka ‘The Elephant Man’. You might be surprised that Joseph was born in our town and spent 22 years living in and around the Wharf Street area. His last four years in Leicester were spent in the Leicester Union Workhouse, and Moat College is built on the site on the old Union Workhouse, so it was here we began our tour. 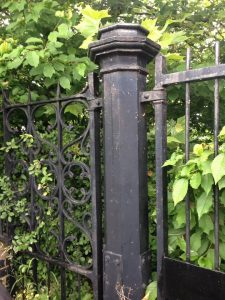 The only evidence of the existence of the Leicester Union Workhouse is a section of the gate on Sparkenhoe Street.

The tour took us past the gate and down Swain Street. On the way we used a worksheet to guide us through the history on our City. 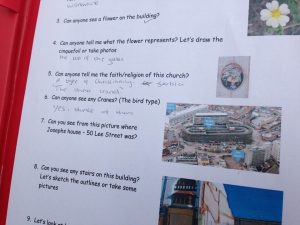 The walk took us past the old Charles Street Police Station. At that point we were looking for flowers. Not many flowers grow around there, but on the front archway a flower is built into the stone. The Cinquefoil, one of the oldest town emblems in the county, dates to the 11th Century Norman Earls of Leicester and can be seen all over the town. On our walk, we tried to find as many as we could.

The heat was rising, and we took a stroll through the shaded path in St George’s Churchyard, looking at the old gravestones and imagining who these departed souls were and what they did during their time on Earth. The path took us to Curve, a modern theatre, but just beyond Rutland Street and across Humberstone Gate we arrived at the site of the old Gaiety Palace Theatre on the corner of Gladstone Street and Wharf Street. It is said that Joseph Merrick exhibited himself for the first time here. 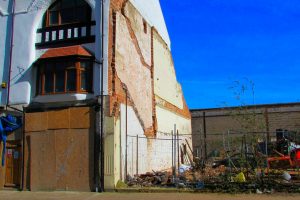 Here we played a bit of old music from Vesta Tilly who opened the theatre in 1883. The students could see the old ghost outlines of the stairs and levels. We stood for a bit sketching the outline of the music hall. The theatre was owned by Sam Torr, one of Joseph’s four managers who secured his release from the Workhouse. Sam also owned The Green Man, a public house which still stands on Wharf Street and probably where Joseph stayed after his release from the Workhouse. 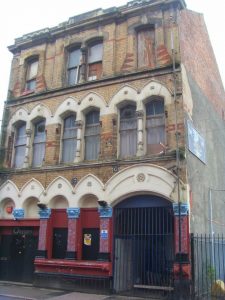 Looking around the city really brought the history alive and the students could feel the Victorian life around them. But what about under our feet?

The students all knew about Leicester being famous for building a car park on a King, but it didn’t stop there. In 1961 Lee Street Car Park was built – yep you’ve probably guessed it, right over Joseph’s house of 50 Lee Street! Obviously, the house had been demolished by then, but the principal is the same. Joseph’s house would have been right in the centre. 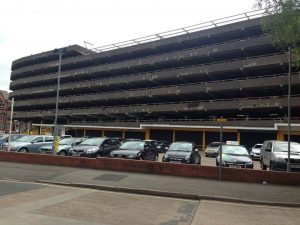 Unfortunately, there is not much left of the original Lee Street, but a little bit of history was waiting for us on Lower Lee Street, the only section of Joseph’s birthplace left, peeking through the road and waiting for the students to find… 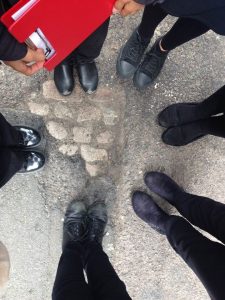 To find out more about the St. Matthew’s Fashioning a City group, click here.