Giant animals, exploding Grandmas, potions and tricks – how do you bring the unique world of Dahl to life? In this creative commentary Julia Thomas, director of our 2017 Made at Curve production of Roald Dahl’s George’s Marvellous Medicine, writes about collaborating with the team to create incredible but believable magic for families on-stage.

One of the most joyful experiences I’ve had as a director is imagining how to bring George’s Marvellous Medicine to life. There were so many brilliant conundrums. How do you have giant animals? Or conjure up realistic potions? Is there a way to blow up Grandma that is both entertaining and believable? My gut instinct at the beginning of this journey was to ban gingham and try to consider what mischief Roald Dahl might be interested in. I wanted George to feel like a scientist in the making, experimenting on his eco farm, full of possibility. A huge part of this was constructing his nemesis- Grandma. All I knew at the start is that she should be more Joan Collins and less traditional old biddy. This was further ignited when I met actor Lisa Howard at audition who totally went with the Joan Collins note and gave so much more. I love this photo because it captures the spirit of collaboration. Where a tiny idea in my head gets realised because of the wonderful imaginations and skills of the actors and the amazing design and production team. Morgan Large the designer has an infectious playful approach and pays such fantastic attention to detail (hand sanitiser, cute socks, crocodile skin bag…) and you can’t hear it, but this entrance was made to full on sound track that made it seem that Grandma was entering on a Harley in an epic American movie (not a mobility scooter) courtesy of the fantastic composer Tasha Taylor Johnson and Sound Designer David Gregory. Later in the play Grandma was ‘shrunk’ by the genius that is Video designer Andrzej Goulding and all the effects were brought brilliantly into the frame by lighting designer Jack Weir. I felt so lucky to be able to make this production and truly blessed that I was part of a team who loved trying to think like Dahl as much as I did. 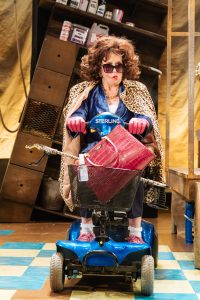